Two interdisciplinary researchers were awarded the Heinz Maurer Prize of Sebapharma GmbH & Co. KG in the fields of basic and clinical research. The prizes are endowed with € 10,000 each. The award ceremony coincided with the Advanced Training Week for Practical Dermatology and Venereology on July 13, 2022 in Munich. Prof. Dr. med. Thomas Ruzicka vice chairman of the jury and member of the scientific advisory board of Sebapharma GmbH & Co. KG and Dr. Daniel Rothoeft, Vice Chairman of Sebapharma GmbH & Co. KG, presented the certificates to the winners, Prof. Silvya Stuchi Maria-Engler from Sao Paulo, Brazil and Dr. Silke Lohan, Berlin. 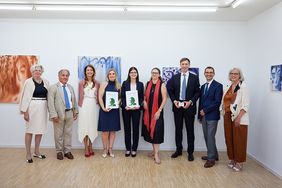 13th Heinz Maurer Award for Basic Research: Effect of Fine Dust on Structural and Functional Parameters of the Skin Surface in a Skin Model
In her basic study, Professor Engler investigated changes in human skin exposed to particulate matter in polluted urban air using a 3D model. The particles caused structural changes in the epidermal cells. It was shown that the barrier function of the skin was also reduced, which impaired its protective mechanisms and led to the death of skin cells at higher concentrations.

The normal maturation process of the cells was disturbed by the contact with the fine dust and a signal substance for inflammatory processes was increasingly produced.
In this mimetic in vitro model for air pollution-induced skin damage, water transport processes were also impaired.

Alterations in the signaling cascades for cell growth and cell death as well as the regulation of gene activities were also observed.
An antioxidant substance was able to restore the balance in the skin model after exposure to particulate matter. This suggests that the mechanism of skin damage by air pollutants is based on oxidative processes.

The observed changes, if transferred to everyday situations, may ultimately affect the structural integrity of the skin and promote or exacerbate skin diseases such as atopic eczema.
This model of human skin has been shown to be well suited to study dose- and time-dependent changes induced by air pollution in human skin.
These study results were published under the title "Air Particulate Matter Induces Skin Barrier Dysfunction and Water Transport Alteration on a Reconstructed Human Epidermis Model" in the prestigious Journal of Investigative Dermatology 2020.

Professor Silvya Stuchi Maria-Engler studied biology and cell biology at Paulista State University and the University of Campinas in Sao Paulo, Brazil, where she received her PhD in biochemistry and molecular biology. Research activities in San Francisco and Sao Paulo and a research fellowship at the University of Michigan complemented her scientific training. Today, she is a professor at the Department of Clinical Chemistry and Toxicology, Faculty of Pharmaceutical Sciences, University of Sao Paulo, and is intensively involved in the development and evaluation of alternative methods in pharmacology and toxicology.

13th Heinz Maurer Award for Clinical Research: Interplay of the antioxidant system of the skin and blood and its importance in maintaining redox balance in the body.
Dr. rer. nat. Silke Lohan of Charité - Universitätsmedizin Berlin received the Heinz Maurer Award for her clinically oriented research comparing damage and natural protective mechanisms in the skin and blood of smokers and non-smokers.

Smoking causes harmful oxidation processes in the body, against which there is a natural protection by so-called antioxidants. The award-winning study shows that the skin-based antioxidant system of smokers differs fundamentally from that of non-smokers. The more radicals generated in the body by cigarette consumption, the more endogenous antioxidants are used up - the body actively tries to counteract excessive levels of oxidative stress. Interestingly, smokers show a significant increase in the body's own protective system glutathione (GSH). The skin thus not only protects the body from harmful environmental influences, but also keeps a supply of antioxidants on hand in case of need. Through intensive care and protection of the skin barrier function, its function as an antioxidant store can be supported.  Antioxidants can also be supplied to the skin through food and targeted skin care and support the body's own defense system in reducing oxidative stress. Antioxidants from food are preferred for combating free radicals produced by active stress situations because of their rapid availability in the blood. An increased content of endogenous antioxidant substances in the skin is more likely to be in "continuous operation" for this purpose and acts as a kind of "buffer system". Using a variety of novel investigation methods, it has been shown for the first time that endogenous antioxidants are stimulated when consumed.
The studies were able to show how this regulation takes place at the molecular biological level through altered gene expression during increased cigarette consumption. Such changes can potentially be used in the future as biomarkers for oxidative stress.

These research results were published under the title " Analysis of the Status of the Cutaneous Endogenous and Exogenous Antioxidative System of Smokers and the Short-Term Effect of Defined Smoking Thereon " in the open-access journal "Antioxidants" 2020, which is peer-reviewed by international experts and published online monthly by MDPI (Multidisciplinary Digital Publishing Institute).
Dr. rer. nat. Silke Lohan was born in Berlin and studied biology at the Free University of Berlin. In 2013, she completed her dissertation in the field of human genetics. She wrote her dissertation at the Institute of Medical Genetics and Human Genetics and the Max Planck Institute for Molecular Genetics in Berlin. In October 2013, she joined the Center for Experimental and Applied Physiology of the Skin (CCP) at the Clinic for Dermatology, Venereology and Allergology at Charité, where she is a post doc.


About the company Sebapharma
Sebapharma GmbH & Co. KG, founded by Dr. med. Heinz Maurer, is a globally active company with headquarters in Boppard am Rhein and over 200 employees. Chairman of the Management Board is Thomas Maurer, the son of the company founder. He is runs the company assisted by Dr. Daniel Rothoeft as Deputy Chairman of the Executive Board. Under the brand name sebamed, medical skin cleansing and care products with a pH value of 5.5 have been manufactured for over 50 years. The company consistently avoids the use of microplastics in its products. Currently, over 100 sebamed products are available in more than 100 countries.