The sebamed freshness kick for marathon runners. At the marathons in Hamburg, Berlin, Frankfurt, Regensburg, Celle, and Paderborn and at other regional running events, sebamed, in its role as a sponsor, treats participants and spectators to a dose of refreshment and healthy skin by handing out free samples. At the sebamed information stand, both the athletes and their supporters can receive tips and advice on how to care for their skin when taking part in sport. We wish every runner and fan an interesting and successful marathon season! 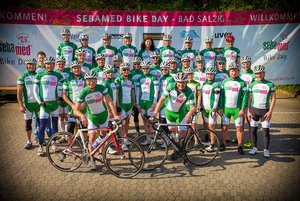 Since 2005, enthusiastic cyclists from sebamed have been participating in mountain bike races. These range from the Ritchey Challenge to local events such as the Schinderhannes Marathon. The three sebamed bike teams from Germany and Austria consist of 50 riders altogether. 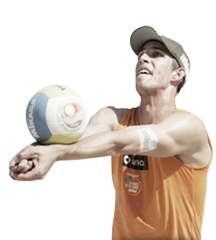 As the best athletes make their way to the start line, sebamed goes with them too. From marathons to triathlons to a host of other sports, as an official supplier, sebamed is what keeps the skin of many athletes healthy. sebamed has been an official supplier of Borussia Düsseldorf since 2004. The table tennis club, which is Germany’s most successful and which includes Timo Boll, trusts the medicinal skin care provided by sebamed.

The sebamed Ute Mückel Triathlon Team also relies on sebamed’s products for daily care and cleansing. With a pH value of 5.5, the medicinal products help the skin to combat the different stresses it is faced during sport effectively. For triathlon participants in particular, the protective products are essential, as their bodies are put under three kinds of stress.

The cycling team ERDINGER Alkoholfrei has been benefiting from sebamed’s medicinal skin and body care since 2011, as outdoor sport in particular subjects the skin to UV radiation and numerous other environmental influences that can irritate it.

And since 2006, the sebamed Inline Team, which is made up of ten people, has been attending lots of national sporting events on a regular basis - and never failing to take sebamed along as well of course.